This is one way to get on with a quilt. Put the progress on your blog, and even though you’re not sure if anyone looks or is even interested, there may be some-one who is, so….. here goes. Another updated photo 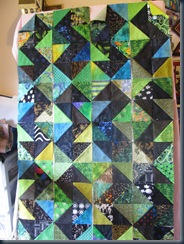 They have just been placed on my design board ( such as it is) but it’s a good way of checking out how many plainer blocks I need to make.

I cut 5” squares, place a green right sides together with a black. I drew a pencil line from corner to corner ( 90 degrees) then stitched a 1/4” seam on both sides of the drawn line. I find that a much better way, as it doesn’t stretch that bias edge.

Off to take a photo out of my sewing room window.

It’s amazing how slow it is sewing 250 odd half square triangles together.

I am trying to make no more than 2 the same, but the pile is slowly growing.

HOW MAD DO YOU THINK I AM? I am thinking of starting a Dear Jane Quilt. My DH says ‘why would you bother’ but I think you can only make so many quilts for the cupboard. Although I have set myself the 16th birthday task for the grandchildren. I have 7 more to do over the next 11 years so that’s not too bad is it?

I am showing a couple of photos of my little gifts that I received over the ‘Quilters Christmas party swaps’. Aren’t they lovely?

This lovely little quilt came from my friend Bonnie in California. Beautifully sewn and quilted.

Made by my friend Pat, who is in my local quilt group, Village Green Quilters.

This lovely bag was made by my friend Gayle who is also in my little local quilt group. About 6 of us also share a friendship away from our main group and we picked a name out of a hat and made a gift for that person. This bag was my gift from Gayle. She also added a needle case to match!

This is the inside of the bag.

Yesterday was Great – today even better!

Had a delicious lunch yesterday, wine and nibbles and Dessert!! The gnocchi was very good, and the dessert wonderful. I made a dessert out of the ‘Food town’ magazine from last Christmas, all ready for my Family day last week, put it in the fridge, then promptly forgot about it. I was worried that the strawberries may have tainted in the pudding, but with all the cream cheese and sour cream they held together, and it tasted yummy! The Cointreau  probably helped!

Today I started a new quilt for Gson #1.

I am really enjoying playing with the colours. I decided to do Green & Black, and started making a couple of blocks. I then realised how boring it was going to be making it, so I changed direction and am now making one of Judy Hooworths Razzle Dazzle quilts.

Yay! The office is closed for 4 weeks!

Great feeling – no phones to worry about. As we work our business from home, it tends to make one tied to the place. It’s lovely to relax and not have to worry about work. Only thing that Has to be done, is take care of the horses.

Don’t know if I mentioned we have an orphan foal who is now about 9 weeks old. It’s been hard on DH who has been getting up all hours to feed the wee fellow, but now he’s on 3 feeds a day, which makes life alot easier. Still, stopped us from being able to go away. This morning DH went out to feed him, only to find that the mothering mare ( not his own mother) had given him a wallop on his rear end,which caused the skin to peel back about the size of a 4” square. So, the Vet arrived once again to stitch him up. We thought he may have ripped his skin on something in the paddock, but the Vet said it was a hoof mark. She is a good mare, so he must have done something to annoy her, for her to have done that. DH says, it’s not a hugely bad thing, as its the way the older horses teach the young ones to behave. Just a damn expensive lesson for us!! 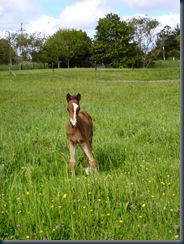 This photo was taken about 3 weeks ago and as you can see he’s doing pretty well. Today he’s feeling a bit sorry for himself.

Must go and have a read, – a great book called Last Child by John Hart. May even have a nana nap – SHOCK HORROR – never do that, but need  to prepare for Midnight Mass!

Cheers every-one and have a great Christmas Day tomorrow.

On The Last Countdown To Christmas Day

We had our family Christmas Celebration on Saturday the 19th. We do this so  the family that can come get to stay for the whole day which makes Grandma a very happy girl.

Usually the children have their ‘other families’ (in laws) to go to, and the day ends up a never ending merry-go-‘round of driving and the littlies end up tired which makes Mum & Dad irritable.

So a great day was had by all, and as I have now done my dash, I get to enjoy Christmas Day at another of the familys’ home. Midnight mass on 24th, sleep, then off to eat Traditional Italian fare. Well Traditional to the family. Lots of wine and nibbles.  The Matriarch aged 92 in April will make gnocchi on Christmas morning. She tells us she has been making gnocchi and sugo since she was 5 years old- helping her mother. Every year we say Nonna ‘thats the best you have ever made’ – then the men will have a snooze.

Looking forward to Boxing Day, when we just blob out, and I will get on with the quilt I am making for my Grandson’s 16th Birthday in Feb.

At Last Back To Blog Land! 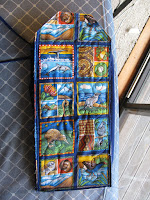 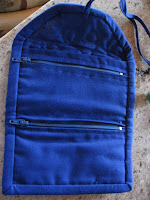 Oh my gosh! It's been so long, and I keep feeling guilty. It's like that letter you owe a friend, and keep meaning to write, but never seem to get around to it!!
I am reading every-one else's blogs and some of them start feeling like friends. It's such a lovely feeling.
I've made a few Christmas gifts in the last month, some of them sent to USA, some given to friends in my quilt group and one sent to Australia. 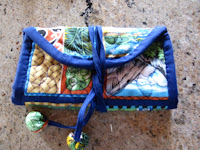 The above are jewellery rolls made from a pattern from my local quilt shop. 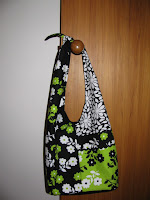 My DDIL had a birthday early December, so made a new bag for her. She absolutely loved it, as she said, when she wears black its nice to have something bright to go with her clothes.
I have shown the reverse of this bag also. It has really useful pockets on the front, and of course a place for that phone ( which never seems to leave her hand.LOL) 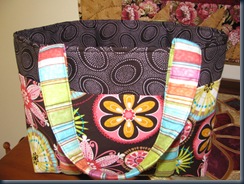 This year in my little quilt group of 8 friends, we decided to draw a name out of a box and to make a gift just for one person. This scheme worked really well, as you knew what the friend would like. My friend was tricky though as she’s quite outgoing in her clothing and in her quilt making,and has really great colour sense. I remembered she admired a bag I made myself a few months ago, so I made one for her. This time I used quite a strong batting, which made the bag stand up on it’s own. Better I think than a soft batting. Next time I make it I may try the very strong interfacing instead and see how that goes.

I need to make myself another one in colours suitable to wear with jeans, and red & white.

BTW she loved it!

Must away now and think about dinner, oh and a glass of wine!