Photo of Quilt with No Borders Yet……

Just come back from shopping with DH. Both of us with new cell phones. We are now looking for a new video camera, for me to take on my Big OE in August. Anyone have any useful info on what is good or not?

I must knuckle down and get those borders on, but in the meantime here is the centre of the quilt completed, and in true form I just had to make a mistake didn’t I? Oh well, didn’t they do that in the ‘ole days and leave it in to be discovered. There’s no way I’m fixing it, so there….

What a busy Day It’s Been

Stayed up until midnight on New Year's Eve.

Mario cooked up some of what he calls Omlette which is his version of Crepes ( Pancakes). They are paper thin and absolutely fabulous to eat. So... at 11 pm we sat with a plate full each on our laps - him with jam on his, but mine HAD to have Golden Syrup. I remember as a child my mother cooking pancakes, but as there were 4 of us kids and Mum and Dad, it took forever to get the 2nd one. I think as I remember we would have had about 3 each, until she got sick of it.

Mario said 'Thats the last thing I'll cook for you this year!! Mind you thats about the only thing he ever cooks and its usually for treats like my birthday or anniversary.

So I’ve been up to my eyeballs in vinegar, sugar etc. and have made 14 small jars of Tomato Relish and 3 1/2 bottles of Tomato sauce. Both old family recipes. 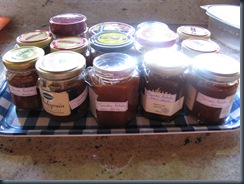 Also managed to make some puree to put in the freezer for the endless spagetti sauce that I make, being married to an Italian.

Now the view from my sewing room window. I’m afraid it’s not as grand as some, but I have lots of light. I have a ranch slider ( door & windows) on one wall, but I didn’t dare show you the other 3 as they are walls with lots of ‘stuff’ on or around them. tee hee:-))

The view looks out onto the back lawn, and that’s another Hydrangea. We have quite a large rambling garden, which keeps me busy. 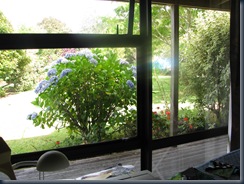 I thought I would wander around the garden and show you some of the plants in flower at the moment. My absolute favourite plant is the Hydrangea of which I have quite a few with different colours. 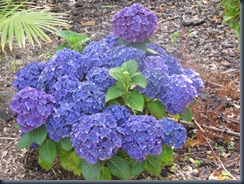 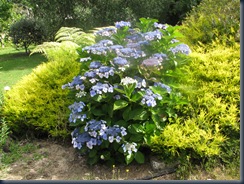 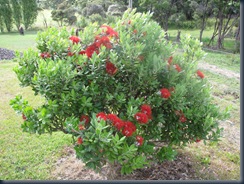 This tree is commonly known as the Christmas Tree, as it is usually a mass of beautiful red flowers during the summer holidays (Our Christmas) down under. It’s botanical name is Pohutakawa. This particular tree is only about 2 years old, and will eventually grow very large, but we have plenty of room. Its out on the edge of the drive into the house.

Ah well, now back to the quilt!