Another DGS’s quilt is finished. Well, it has been for a week or two, but I haven’t managed to get it photographed and blogged until now. I was very happy with this quilt – you know what it’s like, this was one of those quilts that you would really like to keep but can’t, ‘cause there’s no room left in the cupboard!!

I made myself a pledge to make all the grandchildren a quilt each for their 16th birthdays. This is # 2 done, and only 7 left to do. 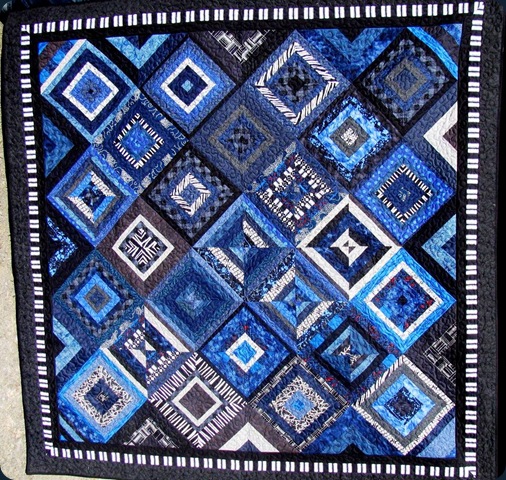 Sorry about the poor quality of the photo. I had the sun beating down and two reluctant holders with arms stretched.  I machine quilted this on my Pfaff and was very pleased with how it turned out. My friend said to me, its because I have done 2 or 3 now, and its all practise. Also this was alot easier to manage in the machine, as it wasn’t as big as what I usually make.This is a topper for a double bed and measure approx. 73” square.

We had our family Christmas day yesterday, so now its all relaxing for me, as I’ve done the stressing bit. DH says he doesn’t know why I get so stressed. I don’t know how he thinks everything would get cleaned and food made for 12 adults and 4 kids if I didn’t.

Any-way now I can get the last minute sewing bits & pieces done for friends and there’s no panic. Our trip to Brisbane has now been changed to March ( birthday time) so that’ll be nice for the family there.

The Box Arrived at Last!

When my sister and I were in Wales back in September ‘10 we knew we were going to struggle with our luggage with the bits & bobs we had already bought, and we were only 2 weeks into our journey, so…. both of us decided to post ourselves home a LARGE box. In it was some clothing we weren’t going to wear anymore on the trip, and some souvenirs, but most importantly mine had some Dutch Fabric I had purchased at the Birmingham Show.
You can imagine how I was feeling by now, that the box still hadn’t turned up. A friend said not to worry as sometimes their mail from the UK arrives months later, so I was trying to be positive. The clothing didn’t matter, but the fabric DID!!
Well today it arrived and it was really exciting, ‘cause I forgot half the stuff I had bought. 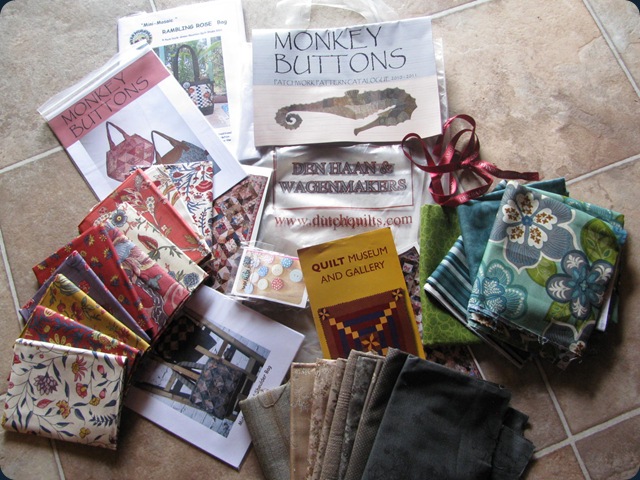 I don’t remember buying the Japanese type fabrics or the blue/green ones.
For the last 3/4 days I have been plodding through the making of  my Nearly Insane Block # 8. I realised everyone was making them in the diagonal order, so I thought I’ll just ‘bite the bullet’ and make a start. I set up my sewing machine on my sewEzi table and put it in the lounge. I have outgrown my sewing room, in so much as I don’t have much room to sit and sew, as its full of fabric, and I find it a bit depressing in the clutter. Its so nice out in the open, so until DH complains I’ll keep on there. I can see on the photo its a bit wonky on the top right corner, so I might have to do some work on it. – We’ll see!! 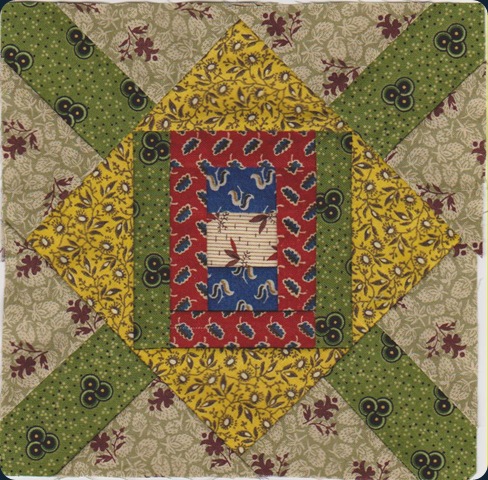 I am enjoying making these blocks – no rush and just pop over to the machine when I can and sew a bit more!
Thanks for dropping by

I seem to be on a roll lately with bags. My DH says Why do you need another bag? I tell him its not a matter of need. but of the fun making them! This one – I bought the Jane Sassaman fabric in one store, had the perfect green to match in my stash, and used some purple fabric for the lining I dyed back about 15 years ago.  I was going to buy a large purple button to put on the bag, but as I wanted to use it I put on a copper coloured one I had in my 40 year old button collection. Friends thought it looked great, so I haven’t changed it. 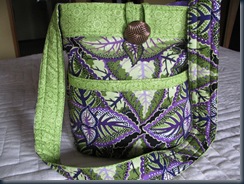 As well as sewing I have been baking. I made a very large Christmas cake recipe and for the first time ever made it in small loaf tins. All these cakes in the photo are from the one recipe. 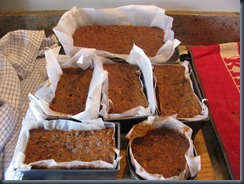 I don’t ice my cakes as DH doesn’t like icing, so I will wrap these little beauties up in pretty Christmas paper for gifts. The one at the back was made in a large loaf tin. I need to have a taste before giving them away. Must make sure they taste right!
Must get back to my Nearly Insane Block.
Thanks for dropping by