A Great Class and Retreat

Sharon who is the President, of my little local Quilt Group, Village Green Quilters in Whenuapai, Auckland decided to organise a 3 day retreat at one of the local beaches just out of Auckland, with Jenny Bowker. There are about 50 members of our group, but only 12 of us were able to attend.
I had only been home 2 weeks, but I had warned DH that I would be going, and just to impress him, showed him Jenny Bowker’s Blog, so he would know it was a serious commitment.
Serious it was NOT, as we had the most fabulous weekend, getting to know those in the group, that you don’t normally spend much time with, other than to have a little chat. We had so much fun, lots of food, wine & nibbles etc.
As I think I’m not up to being artistic, I decided to be a gofer (Angel), and that way I would still have the fun time away with my mates. The class was a HUGE success and every-one thoroughly enjoyed themselves. Jenny is a very generous tutor – apart from the class itself, we learned how to make a folded paper book and a different folded card book_  (good to show the grandies  )

We were also shown how to machine applique and quilt our pieces, something that sometimes gets missed when on a 2 day course. It was so good to have that extra time to finish off. 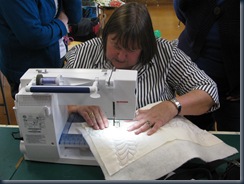 On the Sunday Jenny very kindly suggested I borrow a photo from some-one and draw up  my own picture on the projector to carry on with at home.

Some of the class achievements with a little way to go!

Email ThisBlogThis!Share to TwitterShare to FacebookShare to Pinterest
Labels: Retreats

Well, after being on the go for 6 weeks, I am now at home, and just as busy.I found it too hard to blog from the places I visited, the main reason being time. My sister and I were on the go the whole time. I did get to the last day of the Birmingham Show, which was mind boggling, and my sister’s BIL kindly took us to see some Vintage Welsh Quilts, but apart from that there wasn’t a quilt shop in sight!!  I think Lynn breathed a sigh of relief – her not being a sewer of any description. :-))

I was so desperately trying to get some projects organised before I left to take with me to sew, I may as well have saved myself the time, as I made about 2 candied hexagons. I can’t believe I went so long without sewing, but at the end of each day, after a couple of wines and dinner it was bedtime, so we could get going again the next day. Of course I must explain bedtime was at least 11 pm, and we were up again at 7am.

We hired a rental car and drove 1500 MILES. Got lost more times than I can remember, and on one occasion came off the freeway too soon, but thought we would be O.K. Of course both of us spent a lot of time looking for the loo. This time things were getting to the desperate stage, when we spotted this woman in a little country lane, walking her dog. I rolled the window down and asked her if there was a cafe and toilets in the village. She said no, then seeing the look of horror on my face, said is it the toilet you want. I said Yes Please. She offered if we followed her home, about 200 metres, we could use her toilet. How’s that for a kind action from a stranger. We were so appreciative, we couldn’t thank her enough!!

Will try and post some photos at a later date, but most of what I took was on the video camera, and I still haven’t put it on the computer.